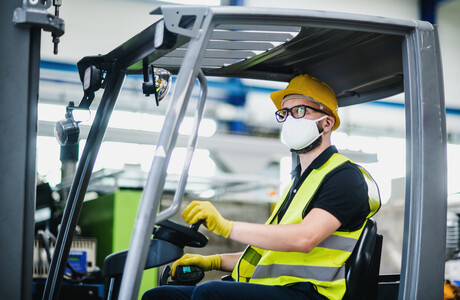 A Brisbane warehousing, transport and distribution business has been fined $60,000 plus court costs of $1100 following an incident that left a young worker with a partially amputated thumb, which had to be surgically repaired. Workers performed various tasks at the Hemmant warehouse, including unloading cargo from shipping containers. The cargo often included large plastic rolls, measuring seven metres and weighing up to 1.6 tonnes.

These rolls were unloaded by dragging, lifting and manoeuvring each one individually using a forklift with an attached lifting jib and sling. The sling was tensioned while the roll was lifted and manoeuvred by the forklift. Prior to the incident, the defendant had developed a written procedure for this task, which included an exclusion zone to be used while moving the rolls.

In November 2018, workers were unloading rolls from a shipping container, supervised by the defendant’s warehouse manager, a qualified dogman, who was instructing a relatively young and inexperienced worker. Both were inside the container and close to a roll while it was being moved by a forklift.

The young worker reached out to grab the sling with his right hand while it was moving, with his thumb caught in a pinch point and partially amputated. His thumb was surgically repaired and he subsequently gained employment as a labourer with a different company. The young worker had not been trained in the work procedure for this task or of the need to implement an exclusion zone. He was not directed to leave the container while the roll was being moved. The defendant also failed to ensure the exclusion zone was enforced while rolls were being moved and failed to ensure workers were properly trained and instructed in the activity.

In sentencing, Magistrate Zachary Sarra noted that companies are responsible for ensuring that workers are treated safely. Magistrate Sarra observed companies need to take sufficient steps to warn workers of potential harm, including in circumstances involving movement of heavy loads and reliance on machinery.

The defendant had taken prompt action to reinforce and refine its established work procedures post-incident, to ensure this type of incident did not reoccur in future. Magistrate Serra considered the defendant’s lack of prior convictions, cooperation with the Workplace Health and Safety Queensland investigation, the contrition and remorse shown, and the early guilty plea. The Magistrate did not record a conviction, observing that the defendant was a reputable company that had made positive changes following the incident.