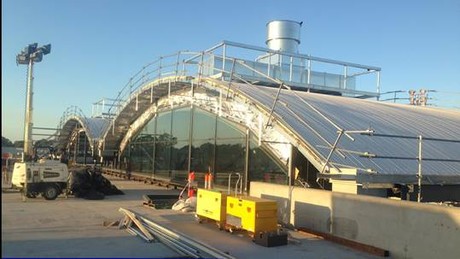 The installation of skylights at a busy shopping centre requires technology that enables the process to be carried out safely and efficiently.

The completed skylights were pulled into place over existing skylights, positioning them with minute care and safety at night while normal retail activities carried on below during the day, throughout the entire operation.

Mulherin used the EVO system to minutely control a bank of four Enerpac RR3014 push-pull cylinders mounted in custom-built horizontal steel frames to pull each of the two skylights more than 90 metres, from where they were fabricated on the roof of the centre, to where they would be used to illuminate the interior of the shopping centre.

Positioned between the two prefabricated convex skylights on the roof of the centre, the EVO system pulled first one then the other skylight in precisely metered steps of about 300 mm each time. The Enerpac cylinders — each with a 295 kN push and 53 kN pull capacity — gradually slid the skylights to the position where they would do their job.

Mulherin Rigging and Cranes Director Gratten Mulherin said the precision control of the EVO system was crucial to the project.

“We needed a system that could stop at any point if a certain load was exceeded, because we were working with glass and could not afford to have any breakages. The EVO can have a preset setting that automatically stops if the load exceeds certain parameters, which greatly reduces potential hazards in the pull,” he said.

“The true ingenuity of this project was pulling the skylights across, rather than building them in situ. It allowed the shopping centre to continue operating beneath, and we didn’t have to set up expensive scaffolding or work solely at night just to build them in their final location. Pulling them across with Enerpac’s EVO system saved significant downtime in that regard.”

The EVO system is the evolutionary result of Enerpac’s 25 years of experience in specialised hydraulic engineering and lifting technology using digitally controlled hydraulics to accurately and safely lift some of the largest and most challenging structures on earth, including mineral and oil and gas processing equipment.