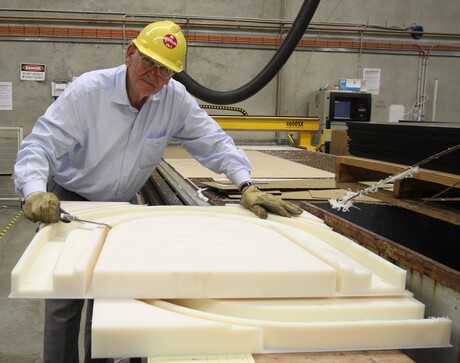 An earthquake exceeding magnitude 7 occurs somewhere in Australia every 100 years or so, according to Australia’s Seismology Research Centre, while nations on the Pacific ‘Ring of Fire’ earthquake zone (including New Zealand, SE Asia, Japan and the American West Coast) experience them more regularly, sometimes several a year. Even relatively smaller earthquakes can cause extensive damage. Lateral restraint blocks made of an engineering plastic that typically retains most of its strength over 100 years are being produced to safeguard suburban and highway concrete bridges against earthquakes and radical structural movement.

The custom-fabricated high density polyethylene PE100 blocks, produced by Hercules Engineering, are used as sacrificial elements so concrete components will remain preserved instead of grinding on one-another, according to bridge bearing producer David Booty, Manager of Hercules Engineering (a division of Cut To Size Plastics). Alongside minimising sliding wear, HDPE blocks can also minimise the impact of shock by deforming and absorbing the kinetic energy that could otherwise fracture or destroy single span beam bridges spanning creeks, hollows and smaller obstacles, potentially causing accidents and human casualties, disrupting vital communications and costing time and money to restore. Hercules Engineering produces a range of bridge bearings that are in high demand, as bridges cope with the expanded loads they have to carry on public and private roads, including those serving resource, construction and civil engineering sites.

“Bridge builders — including public works and private enterprise — are very aware of their Duty of Care to safeguard their structures’ safety, so we had approaches to see what we could recommend as the best long-term, simple and cost-efficient solution. It turned out the PE100 blocks were not only the best polymer available for the job, but also one of the least expensive,” Booty said.

The easily handled and installed PE100 virgin grade HDPE blocks — the latest order for which was 200 x 200 x 40 mm blocks for a Sydney suburban bridge — are made from the same long-life material from which HDPE water pipes are made. This long-life material has been tested by the International Technical committees responsible for ISO and EN standards. HDPE can be welded, does not absorb moisture, does not crack when water is frozen solid inside and can tolerate deformations without cracking. PE100 can retain 60% of its mechanical strength at average ambient temperatures of 20°C for up to 100 years. Hercules Engineering also produces Stainless-Steel PTFE Elastomer Bearings to enable concrete and steel structures to flexibly, quickly and cost-efficiently cope with internal movement and stresses caused by changing loads, vibration, thermal expansion and other common additional factors.

Another solution developed by Hercules Engineering comprises the range of no-maintenance, cost-efficient Herculon Type D Bearings (HLD/SG, HLD/FF and HLD/FX), which are suitable for applications complementing the PE100 blocks, ranging from steel and concrete beam engineering structures through to materials handling and processing facilities. Herculon HLD bearings are part of a range of Hercules composite sliding joints and structural bearings incorporating high performance combinations of engineered composite materials and stainless-steel facing surfaces. Hercules Engineering has provided sliding joints and bearings to help protect and extend the longevity of buildings and major industrial structures in Australasia, the Asia–Pacific and Africa. Australia’s Hercules Engineering has also provided long-lasting products for use in structures as diverse as the Sydney Opera House and the New Parliament House in Canberra.