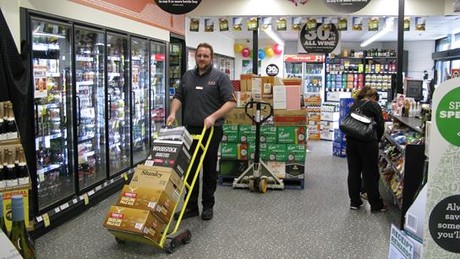 In its quest to improve the handling of heavy loads involved in moving product cartons, BWS has adopted the self-supporting Rotatruck.

The liquor retailer had previously implemented traditional two-wheel handtrucks, which saw the user having to to negotiate their way through narrow aisles while balancing the heavy load. This added considerable ergonomic stress to the body. Likewise, the manual loading and unloading of the trolley required a great deal of bending and flexing.

BWS Head of Design, Construction & Equipment on the Store Support Team Paul Burrows explained why the company needed a better solution. “We handle a lot of stock in our stores which results in heavy use of trolleys. This resulted in large maintenance costs to replace tyres and other trolley components, as a large amount of our stores have curbs to lift the trolleys over.

“We were also at risk of stock loss and potential injury to our team members,” added Burrows.

By adopting Rotacaster’s self-supporting Rotatruck, BWS was able to focus staff on safely guiding the load down the aisles, rather than having to primarily support them. This improved the ergonomic handling qualities for the user and significantly reduced fatigue. Loading and unloading was also improved by the two-phase self-supporting position. Fewer pull-backs considerably reduced strain on the operator.

“Since we adopted the self-supporting Rotatruck, we have had positive feedback from our team members as it has made the process of handling stock easier to manage,” said Burrows.

Rotatrucks allow the easy change of direction without destabilising the tall load (unlike traditional swivel casters) as Rotacasters are in a fixed mount. The Rotatruck requires no power to the wheels and minimal maintenance imposing increased productivity.

“The way the system is designed has enabled us to pull stock up curbs and over speed humps which has made a significant difference to our stock handling. Our team members are safer using the Rotatruck as well as less stock loss,” concluded Burrows.