An innovative manipulator has been developed to improve safety and productivity in underground construction. Suitable for the mining and building industries, the equipment provides a solution to the significant safety issue of personnel working with suspended loads, especially in confined underground work areas. Local mining contractor Redpath Australia has developed a machine capable of erecting steel beams in underground mines at a much safer and faster rate than the current process using cranes.

The Redigrip PSM (Precision Steel Manipulator), which has seen Redpath short-listed for an NSCA National Safety Award of Excellence, is a hydraulically controlled beam manipulator that can lift beams weighing up to 1.2 tonnes with a reach of up to 8 m. It has already been used to improve safety and productivity at a mine construction project, finishing in three-quarters of the time and incident free. 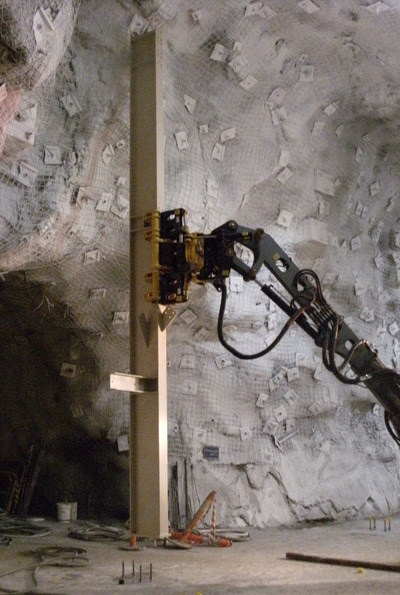 The idea was born when Redpath Australia was engaged in a tender process for the reconstruction of an overhead crane at an underground mine, where it identified the opportunity to improve workplace safety by eliminating the need for the slinging of enormous beams and columns during construction.

The principal breakthrough in the design of the Redigrip is the unusual combination of components and systems, combining mining machinery parts with those used in forestry and agriculture to create a new tool with uses and solutions for projects across a range of sectors.

“While the Redigrip was purpose built to improve productivity for a specific project, it can be easily adapted for use in any industry and the design allows it to be used with various materials,” says Graeme Christie, Health, Safety, Environment and Quality Manager for Redpath Australia.

“The safety and productivity benefits are incredible. The Redigrip eliminates the need for a conventional crane in a confined, underground space and minimises the personnel exposed to potential crush injuries from handling heavy loads, all while completing the work faster,” Christie says.

The Redigrip PSM is a combined effort between Redpath, Mecad Engineering, Doherty’s and M&J Hydraulics, and is capable of 360° rotation, 40° side tilt left and right, 140 mm side shift, 180° primary tilt and 600 mm of telescopic extension, powered by a Volvo L120 front-end loader.

“Finding new ways to make people and machinery safer is something Redpath does on every single project, and the result is a range of innovative machinery which either has features improving its safety and productivity, such as our range of Redbore raise drills, or is custom designed to meet a specific need, like the Redigrip,” says Christie.

The Redigrip PSM is not restricted to underground mines either, with minor modifications making it suitable for safe, flexible and rapid steel structure erection, civil works such as sewerage tunnelling, installation of rising main pipes, and in sheds and fixed plant installations on the surface.

Another potential enhancement to the Redigrip is to use it with a telehandler, which would allow greater flexibility for use with potentially larger sections and allow for greater lifting heights, while still minimising the involvement and risk to personnel.

The multi-lift vacuum unit developed by Qube enables the safe handling of coated pipes, and...