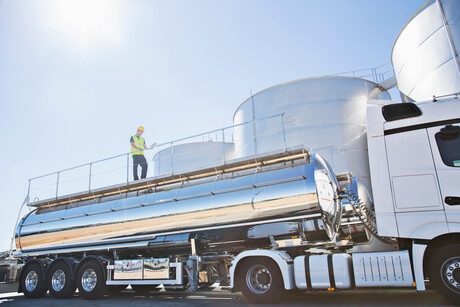 In May 2018, the truck driver died when the milk tanker he was operating rolled onto its side while travelling around a bend at Leongatha. An investigation revealed that despite nine previous rollovers since 2009, Peter Stoitse Transport had failed to provide its drivers with detailed information, instruction or supervised training in driving milk tankers carrying dynamic loads. A subsequent inspection of vehicles at the company’s Leongatha depot in July 2018 saw major defect notices issued for four of five prime movers and four of five tanker trailers inspected, requiring them to immediately be taken off the road.

WorkSafe Victoria alleged that it was reasonably practicable for Peter Stoitse Transport to ensure that its drivers were properly trained and to adopt a safe system of work to ensure its milk tankers were maintained in a safe mechanical condition. In September 2018, the company did not notify WorkSafe following a separate rollover at Echuca that left another driver needing hospital treatment for a serious laceration. WorkSafe Executive Director Health and Safety Narelle Beer said the company had shown a clear disregard for the safety of its drivers.

“Any vehicle used by a worker as part of their job is considered to be a workplace and employers therefore have a duty to ensure they are kept in a condition that is safe and without risks to health. Tragically, two workers have been killed in vehicle accidents so far this year and WorkSafe will continue to take strong enforcement action against those duty holders refusing to keep their workers safe on the road,” Dr Beer said.

To manage work-related vehicle risks, WorkSafe advises that employers should ensure that appropriate safe systems of work are in place and that these are regularly monitored, reviewed and, if necessary, revised. Employers should also ensure regular vehicle inspections, servicing and maintenance are undertaken by suitably competent persons, in accordance with the manufacturer’s recommendations. WorkSafe also recommends that pre-operation checks be conducted daily on essential components such as brakes, steering, tyres (including pressure), indicators, oil leaks and suspension, with defects to be rectified by competent persons. Employers should not allow untrained, unlicensed or inexperienced people to operate vehicles.

WorkSafe encourages employers to implement a system to ensure that people are competent to conduct the work — this should include instructions, information about the work, mentoring and assessment, toolbox training and refresher training even for experienced employees. Appropriate rules and standards should also be established for safe road use (including speed limits for travel and manoeuvres), taking into account any load factor of a vehicle, including movement of liquid and its effect on the stability of a vehicle, increased braking distances due to the surge of liquid within a tank and changing environments and conditions. Employers are advised to communicate all safety information to drivers and others (such as load information for those responsible for loading and driving vehicles) to enable them to perform their work in a way that is safe and without risks to health.