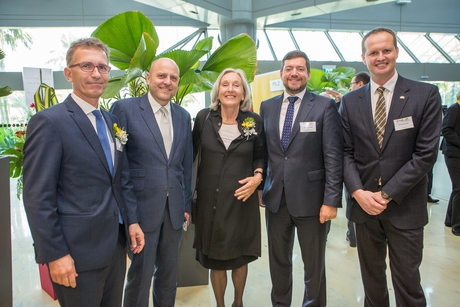 Pilz has recently opened its regional headquarters for South-East Asia in Singapore. Located at the Singapore German Centre, Pilz South East Asia Ltd will employ 30 people over the next three years to manage neighbouring subsidiaries in ASEAN countries such as Thailand, Malaysia, Indonesia and Vietnam.

“Globalisation is promoting the creation of uniform standards,” said Renate Pilz, president and CEO of Pilz GmbH & Co. KG. “Wherever automation happens, the safety standards also rise. This elevates safety to a corporate value: companies can secure competitive advantages through the quality of their safety standards, and thus set themselves apart. The human being remains the centrepiece at all times.”

Fong Pin Fen, Director Cities, Infrastructure and Industrial Solutions, Singapore Economic Development Board (EDB), said that she was pleased that Pilz has chosen Singapore to establish its first presence in South-East Asia to expand and grow its industry automation business, while contributing to the continued safety of the region as factories adopt newer manufacturing technologies.

“With Singapore’s emphasis on research and development, skills development and strict enforcement of intellectual property rights, the city offers an ideal business environment for family-run Mittelstand companies that are global leaders in niche technological fields to expand into Asia,” she said.