VicRoads announced it will install radar-based reverse braking technology on its road maintenance fleet, which could become standard across industry.

VicRoads said the automated system is the first of its kind to be trialled in Australia and it is the first heavy fleet operator to install the technology.

“Safety in the workplace is of the upmost importance and this technology will significantly improve safe working conditions for VicRoads employees,” said VicRoads Chief Executive John Merritt.

“The safety of our people and members of the public is paramount and the autonomous braking system will make a difference.”

According to WorkSafe Australia, between 2003 and 2012, 18 workers were killed in the workplace by incidents involving reversing trucks. Fatalities included six workers killed while undertaking loading activities, five while undertaking traffic control activities and three other workers who were hit by a truck while moving about on construction sites.

VicRoads recently completed a six-month trial of the radar-based technology, installed on a patrol truck and a tip truck. When the system detects an object at the rear of the truck as it reverses, the airbrakes are automatically applied. 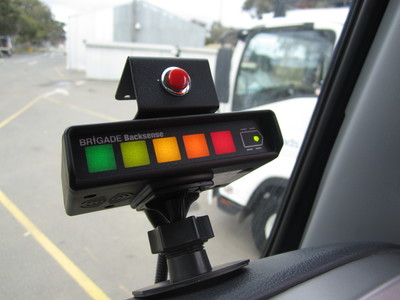 VicRoads will now progressively install the technology on its fleet.

“The technology works alongside other safe systems already in operation and complements our suite of workplace procedures,” said Merritt.

Autonomous emergency braking systems are standard on new cars in Europe, Japan and the United States; however, the VicRoads trial is considered to be pioneering due to the retrofitted radar system applied to road maintenance vehicles that is activated when reversing.

“We believe this technology will significantly reduce worksite risks and we hope it will become standard across the industry,” said Merritt.

“Our dedication to workplace safety never ends and VicRoads will continue to consider any new technology which may save lives.”

VicRoads will share the trial data with transport groups and fleet managers and anticipates the technology will be widely used within the construction industry.

SafeWork NSW will conduct site visits across Wagga Wagga to ensure that businesses are managing...

A recent spate of incidents involving fixed plant has prompted WorkSafe Queensland to issue a...

Beating back salmonella on food equipment using oil and acid

Updates from the Food Ministers' Meeting

Review set to pave the way for International PCOS Guidelines

AI in health — can we program human dignity?