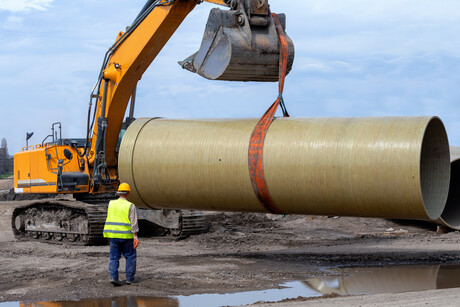 In March 2022, a worker suffered a chest laceration and internal injuries when he was struck by a steel post. Investigations into the incident are ongoing and have revealed that the worker was part of a team installing a retaining wall at a residential construction site. The steel post had been stood upright, using a sling attached to an excavator in close proximity to the worker. The steel post appears to have slipped off the sling, striking the worker.

Mobile plant (other than a mobile crane) can sometimes be used as a mobile crane to lift or lower freely suspended loads. Mobile plant that is used in this way includes earthmoving machinery such as backhoes, front-end loaders and excavators. Unlike cranes, these types of mobile plant are not specifically designed to lift or suspend loads. As an example, earthmoving plant used in crane mode generally cannot lift in a purely vertical motion like a crane because it is not fitted with a winch. Lifting of loads may present a risk to the health and safety of nearby people. For example, damaged lifting gear can cause load failure. Additionally, posts being lifted with a sling choked around the post cannot hang vertically — this can increase the risk of the post falling over when the crane hook is lowered.

There are significant risks associated with using plant that lifts or suspends loads, and severe injuries can result from unsafe use. When mobile plant (other than a mobile crane) is used as a mobile crane, the level of safety provided by the lifting set-up should be at least equal to the safety level achieved when a mobile crane is used. Specific controls are required for this plant, including but not limited to section 219 of the Work Health and Safety Regulation 2011. Business owners should consider using a mobile crane for the task rather than an excavator, where it is reasonably practicable to do so.