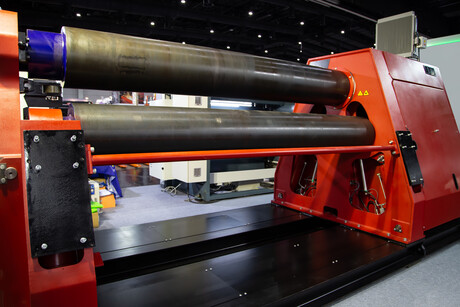 A company has been fined $40,000 for failing to ensure the health and safety of its workers, resulting in exposure to risk of death or serious injury. In particular, the defendant failed to adequately supervise an employee. The defendant operates a business that rolls sheets of metal into cylinders using large rolling machines. At the time of the incident, the company owned and operated two plate rollers, one inside the factory which contained three rolling mechanisms and a larger roller, the DAVI machine, located outside the factory, containing four rollers.

To clean the inside machine, workers sprayed kerosene on the rollers and wiped them with a rag using their hands. The bottom two rollers could be lowered to create a space large enough to fit a person, therefore removing the pinch point and its associated risks. Workers often bypassed the machine’s hold-to-run control by hooking a C-shaped piece of wire around the button, so they could clean the machine while the rollers turned.

Although the worker was told not to turn on the machine prior to cleaning it, he bypassed the machine’s hold-to-run control by using a bungee cord that ordinarily secured a protective tarpaulin over the apparatus when not in use. The worker connected the bungee cord around the joystick of the machine, much like the wire placed around the button of the inside machine, so that he could clean the rollers as they turned.

Midway through cleaning, the worker went inside the factory and asked his supervisor whether he could move the top roller of the machine upwards to create a larger gap, as was done with the inside machine. The supervisor advised the worker not to turn on the machine, as operating it while the rollers were up would damage the machine.

The worker returned to cleaning the machine with the rollers moving; his arm was subsequently drawn into the rolling machine, causing crush injuries and degloving injuries up to his elbow.

Work Health and Safety Queensland investigated the incident and found that the company did not have any documented procedures or Safe Work Method Statements for cleaning the rolling machines. Discussions with employees revealed the ‘correct’ method for cleaning the machines was to clean a section of the roller, then turn the rollers to the next section, turn off the machine, and then clean the next section.

Magistrate Clare Kelly accepted the basis of the defendant’s plea was that the company failed to adequately supervise the worker, who was a new employee and was previously instructed to clean the inside machine while it was operating.

Magistrate Kelly acknowledged that the worker did not have adequate experience cleaning the machines, and there were no written procedures outlining how to do so. However, the worker disobeyed two clear instructions not to turn on the DAVI machine before cleaning it.

The company had taken post-incident remediation steps, with Her Honour noting that the defendant’s antecedents were significant with only one injury on its work health and safety record in 20 years. Her Honour also considered the company’s strained financial position and that it had continued to employ all its workers despite the impacts of COVID-19. Thus, Magistrate Kelly imposed a fine of $40,000 with court costs of almost $1600. No conviction was recorded.