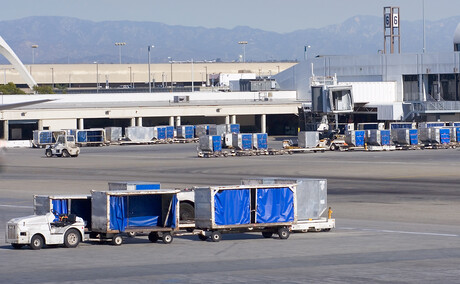 Ground and air cargo services company Swissport Australia Pty Ltd has been fined $110,000 and ordered to pay $8000 in costs, after an incident in which a baggage handler was seriously injured when he fell from a moving baggage tug at Perth Airport. The company pleaded guilty to failing to provide and maintain a safe workplace and, by that failure, causing serious injury to a worker.

The incident occurred in August 2018, when the injured worker was unloading baggage from a Virgin Australia Airlines aircraft that had recently landed, when another Swissport employee drove by him on a baggage tug. He boarded the vehicle as a passenger and, after travelling a short distance, the driver turned the tug and he fell from the side onto the tarmac, hitting his head on the ground. The vehicle was not fitted with a passenger seatbelt. The worker suffered serious head injuries and required urgent surgery, followed by further urgent surgeries later due to complications from his injuries. He also suffered ongoing medical problems requiring physiotherapy and occupational therapy.

WorkSafe Commissioner Darren Kavanagh said that the case was another example of an organisation not performing adequate risk assessments or acting to improve or eliminate workplace hazards. Kavanagh said that after the incident, both Swissport’s Airport Manager and Ramp Manager confirmed that, had a risk assessment been performed, the tug involved in the incident would not have been in service until a passenger’s seatbelt had been installed.

“The vehicle from which the worker fell did not have a seatbelt for a passenger, and workers were permitted to ride in it. In addition, both Swissport’s own written procedures and Virgin’s procedures for Swissport prior to this incident stated that seatbelts were to be worn ‘when fitted’, but did not prohibit driving or riding on a tug that was not fitted with seatbelts. Both the driver of the tug and the injured passenger assumed the vehicle had been assessed as safe as it was in use. No instructions were given to conduct pre-start checks on the luggage tugs,” Kavanagh said.

Kavanagh added that the circumstances of this incident indicate that the company failed to provide a safe and healthy work environment for its workers.

“The case should serve as a warning to other companies that thorough risk assessments are the primary component of providing and maintaining a safe workplace, as required by the state’s workplace safety laws. With the re-commencement of air transport services now in full swing, work health and safety is particularly crucial,” Kavanagh said.

Virgin Australia Airlines Pty Ltd has also been charged over this incident, and has pleaded not guilty. The company will go to trial in August.

WorkSafe Victoria is investigating an incident in which a 59-year-old truck driver was crushed by...

Tractor operators have been urged to take steps to manage the risks of operating tractors and...