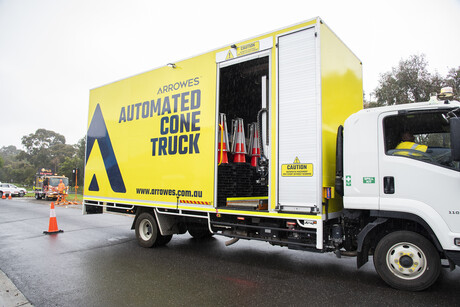 A technologically advanced automated traffic cone truck has been unveiled in Melbourne after two years of real-world testing to prove its safety credentials. The truck’s inventor, Arrowes, joined with key stakeholders, including the Victorian Government and infrastructure construction companies, to launch the truck at Holmesglen Institute’s Victorian Tunnelling Centre which is training road construction workers to operate the new truck.

Arrowes CEO Lea Ea said the Automated Cone Truck (ACT) features a lot of ‘smarts’ and mechatronics that automatically place and retrieve traffic cones to ensure workers are not exposed to the risk of traffic. “The ACT will revolutionise the industry and is set to become the new norm for safe and efficient cone deployment and retrieval both in Australia and internationally. It will rewrite health and safety and operation standards around roading worksites and mean that workers return home safely every day to their family and friends,” Ea said.

Road construction and maintenance workers are reportedly among the most likely to be involved in a workplace accident in Australia. Research by Safe Work Australia revealed that 63% of fatalities on worksites were caused by being hit by moving vehicles. The ACT, which is designed and manufactured in Australia, has been recognised for its innovation, named as a finalist in a Major Transport Infrastructure Authority infrastructure safety technology award, after being nominated by Major Road Projects Victoria.

The prototype truck was unveiled to the industry in October 2020, followed by two years of trials on various projects, including the M80 Ring Road upgrade in Melbourne. The feedback from the trials has been incorporated into the commercial design which has now been released. “The innovation meets a global need and application and confirms Arrowes as Australia’s premier innovator in roading safety,” Ea said.

Several years ago, Arrowes employed a group of young engineering graduates from the Queensland University of Technology and University of Queensland to work alongside Arrowes senior engineers on automating the placement of traffic cones to reduce risks associated with placement and retrieval of cones, to make the process safe and efficient. The ACT can deploy one cone per five seconds and can be placed at 3–24 metres spacing. For example, when deployed with 12 m cone spacing, the ACT can deploy cones at 8 km/h or at 24 m spacing at 16 km/h.

The ACT can also retrieve cones from both sides of the vehicle while driving forward or reversing. With a capacity of 400 cones, the ACT is equipped to close over nine kilometres without stopping. “The goal of the ACT is to improve safety and in doing so, naturally it will also improve productivity. One kilometre of lane closure takes the ACT around seven minutes — and it does this without exposing traffic workers to hazards,’’ Ea said.

Infrastructure construction roadworks supplier Fulton Hogan endorsed the ACT and said Arrowes is a technology leader and innovator. Thomas Holdaway of Fulton Hogan said that Fulton Hogan has embedded safety and risk management deeply in its company culture, adding that overall sustainability supported by a zero-harm safety culture is the only way to do business.

“Arrowes knows and understands the importance of safety in the roading industry; the risks associated with working in live traffic and in high-speed environments,” said Doug Talbott, Project Director of international engineering and construction company Laing O’Rourke.