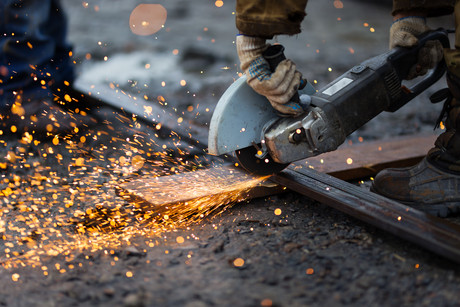 A South Australian worker has sustained serious injuries after the angle grinder he was using became jammed and kicked back into his face. SafeWork South Australia (SafeWork SA) said the grinder had been fitted with an incompatible saw-type (milling) blade and was being used to prepare material for welding when the incident occurred. SafeWork SA is investigating the incident and issued a reminder to only use cutting discs specifically designed for the equipment, as recommended by the manufacturer. Workers should also consider whether an angle grinder is the best tool for the task and whether another tool could be as, if not more, effective.

If workers decide to use an angle grinder, it should be held with minimum pressure against the workpiece to prevent the disc from ‘grabbing’ and causing the grinder to kickback. Choosing a lighter tool, rather than a larger, heavier or more powerful one, can help this. Guarding should be kept on the grinder at all times, covering half the disc and positioned between the disc and the operator.

Anyone working with an angle grinder should use personal protective equipment (PPE), including wide vision goggles, safety glasses or face shields, earmuffs or earplugs, safety boots with steel toe caps, overalls or other fitted clothing and well-fitted gloves that allow for good grip of the tool. SafeWork SA also recommends one-on-one supervision be provided for workers receiving training in, or who are unfamiliar with, angle grinder use and that workers remain a safe distance from anyone who is grinding. Grinders should be regularly checked for electrical safety and any defects, and repaired by a competent person.

More information on safe angle grinder use can be found via SafeWork SA’s website.

A worker has been injured at Ravensworth Operations, after driving a light vehicle over an edge.

SafeWork Victoria has issued a reminder about safely operating remote controlled plant and...

A NSW mining company is facing a $1.5 million fine, after a truck collision hospitalised one of...