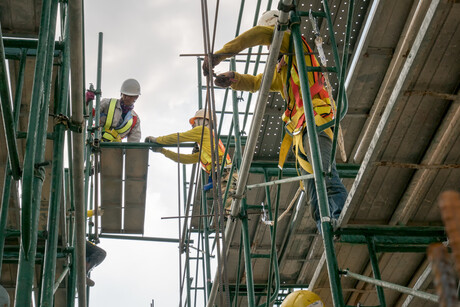 A 50-year-old Tingalpa construction company and its director have been fined $80,000 and $10,000 respectively, following a 2020 workplace incident in which a man suffered a traumatic brain injury after a fall from height. The defendants were charged with failing to comply under the WHS Act 2011, exposing an individual to the risk of death or serious injury.

The incident occurred in April 2020, when two workers were installing floorboards on the mezzanine level of an industrial shed. One of the workers fell 3.3 metres onto the concrete, suffering a traumatic brain injury, eight fractured ribs and a fractured scapula. A Workplace Health and Safety Queensland investigation revealed that 20 metal purlins were bolted to a bearer at the front of the mezzanine level, but not bolted to the bearer at the rear of the mezzanine level. Some, but not all, of the metal purlins were welded to the rear bearer and the unsecured purlins could easily move, creating a large gap. The investigation also found a Safe Work Method Statement was not in place for the work conducted at height, and steps had not been taken to identify the risk of a fall from the mezzanine level, with no measures in place to eliminate or minimise the risk of a fall, such as guard rails, harnesses or personal protective equipment. The company also failed to provide appropriate and adequate training in safe practices for working at heights and risk of falls.

In sentencing, Magistrate Judith Daley considered the family company’s unblemished history in construction, cooperation with the investigation, an early guilty plea, and no previous convictions. Magistrate Daley also noted the company had engaged a safety advisor to formalise safety procedures in the workplace. Magistrate Daley said that due to the serious nature of the offending, a Safe Work Method Statement could have eliminated or minimised the risks. The purlins should also have been welded, and the company should have done checks to ensure that work had been done. Her Honour acknowledged the significant injuries suffered by the worker and the company’s continued support of him.