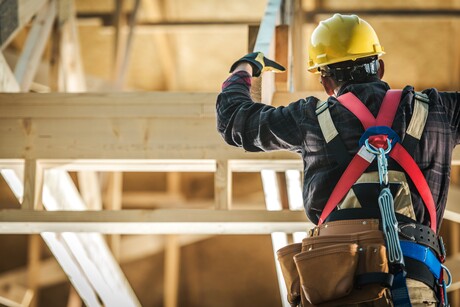 A carpentry company has been convicted and fined $90,000, and the company director fined $21,000, after an apprentice worker fell from a height of more than three metres and sustained serious injuries. The incident occurred in December 2018, when the apprentice worker was undertaking wood framing on the first floor of a residential building. The worker was walking backwards and unrolling some building material and fell through an unprotected and uncovered void, where a stairwell was to be installed. The apprentice carpenter fell over three metres onto a concrete surface, and was hospitalised with spinal and pelvic injuries that required surgery. The worker had been employed by the carpentry firm for approximately nine months.

A SafeWork SA investigation found that the incident could have been avoided if a safe work method statement and pre-start checks had been undertaken in relation to controlling the risks of working at live edges. The risk of falls had not been identified and no fall protection had been installed prior to the work task being undertaken.

SafeWork SA Executive Director, Martyn Campbell, said apprentices look to their supervisor for guidance to learn how to undertake their job safely and competently. Campbell urged businesses with apprentices and trainees to understand their obligations under South Australian work health and safety laws.

“The Construction industry is at greater risk of serious injuries associated with working at height. SafeWork SA 2020 data relating to falls from heights identifies carpenters are most at risk. Inspectors from SafeWork SA are currently conducting compliance audits on falls from heights in the residential construction industry and incidents such as this reinforce my zero tolerance to sites that do not take the risk of falls seriously,” said Campbell.

The second defendant submitted that no conviction be recorded; Deputy President Magistrate Cole considered the defendant’s genuine remorse and the significant changes and improvements that had been implemented, however acknowledged the worker “sustained a serious injury which was preventable”. Magistrate Cole further stated that “not recording a conviction would fail to reflect the seriousness of the breach in this case”.

Boosting recyclability in the freezer section

What's new on the shelf this August?