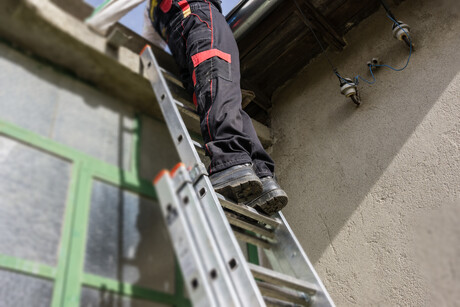 SafeWork SA has issued a safety alert to remind the construction industry to assess whether a ladder offers the highest level of protection to workers after a person was killed and two others were seriously injured in falls less than two metres over the past six weeks. On 19 January 2022, a worker suffered fatal head injuries when they fell to the floor while installing ceiling joists from a ladder within a warehouse. SafeWork SA is investigating the incident.

Another incident occurred when a worker, traversing two levels of a modular scaffold at a residential construction site, sustained fractures to their shoulder and a serious laceration to their left hand when the foot of the access ladder slipped out, causing the worker to fall heavily on the platform. The scaffold access from level two to level three had been inadequately installed by the builder and not undertaken by a scaffolder holding a high risk work licence. In the third incident, a worker, drilling holes for a down pipe at a residential construction site, fell from a ladder, impaling their left foot on an unprotected vertical reo bar. At the time of the incident the ground around the work area was uneven.

SafeWork SA has reminded duty holders to consider reasonably practicable control measures to manage the risk of falls from heights, particularly providing adequate information, training and supervision when workers are required to use ladders. Portable ladders are one of the least stable but most commonly used tools for working at heights and typically require workers to be more vigilant about the risk of falling. Portable ladders can be a sensible and practical option for working at height when the use of other equipment is not reasonably practicable because of the low risk and short duration of the work.

Before choosing to use a ladder, employers are advised to identify whether a ladder offers the highest level of protection. This can be determined by assessing all known and potential risks associated with the use of the ladder, including the environment it is used in, and following the hierarchy of control for prevention of falls. SafeWork SA Acting Director, Glenn Farrell, reminded duty holders that the type of work that can be safely performed on a ladder is limited. Work platforms or scaffolding provide a safer way to work at heights.

“Deaths and serious life-changing injuries through falling from ladders can occur from surprisingly low heights. This is highlighted by the fact that in 2021, 61% of serious injuries associated with a fall below 2 metres were from a ladder. Most of these incidents involve a ladder being used incorrectly or inappropriately. If a suitable safe system of work had been in place prior to the incidents, the serious injuries sustained by the workers could have been prevented. Sadly, one of those workers will not be going home to his family as a result of falling from a ladder at work,” Farrell said.

In most cases, working from a ladder should be the last option as a fall from a ladder can have devastating consequences. In accordance with the hierarchy of control, duty holders should eliminate the risk by doing all or some of the work on the ground or from a solid construction. SafeWork SA also encourages the use of a passive fall prevention device, such as scaffolds, perimeter screens, guardrails, safety mesh or elevating work platforms. Using a positioning system, such as a travel-restraint system, can also help ensure that employees work within a safe area. Using a fall arrest system, such as a harness, catch platform or safety nets, can limit the risk of injuries in the event of a fall. Employers are also advised to use a suitable fixed or portable ladder, and to implement administrative controls.

The Pack King LEV8 single-person lifter is a hybrid, using a ladder (with fitted hand rails), to...