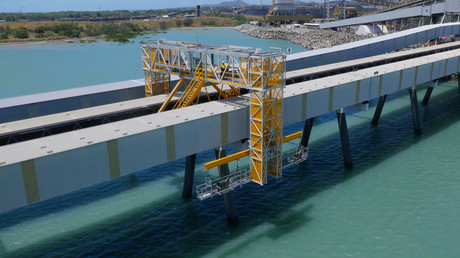 An innovative jetty access maintenance solution developed by John Holland has been improving safety for workers at the Dalrymple Bay Coal Terminal.

The company designed the Mobile Swing-stage Gantry in an effort to keep workers safe while maintaining 1706 marine piles across the terminal.

Multiple safety risks were identified with the maintenance of the marine piles, and a process of preliminary development, detailed design, manufacture, supply and commissioning of the gantry was subsequently undertaken. The outcome eliminated several significant workplace hazards that directly affected workers.

“With a simple idea, we saw the opportunity to do something of immense safety benefit for the workers, and we had the conviction to back ourselves and make the idea a reality,” said Project Manager Wes Johnston.

Prior to the establishment of the gantry, work carried out on the steel piles would require scaffolding to be built, which was a major source of safety-related incidents. Other risks to employees at the terminal included accessibility, where personnel were working in harnesses over water, falls from height, falling or dropped objects, manual handling injuries, entanglement in operating conveyors, congestion, being struck by moving vehicles on the jetty and drowning.

The gantry has now eliminated scaffolders working at heights over water or underneath operating conveyors in harnesses for extended periods of time. It has also removed access blockages/restrictions and eliminated vehicular/worker interfaces on the jetty. In addition, workers no longer have to access and repair scaffolds that have been damaged by the ocean, the risk of dropped objects has decreased and the potential for manual handling injuries has also been reduced.

The gantry is equipped with some of the best safety functions on offer, including wind speed alert, safety stop buttons and isolation protocols. It also helps to reduce the loss of time associated with building scaffolds and working around tides.

The equipment is environmentally friendly, and both time- and cost-effective. Maintenance work that would typically take seven to eight days to complete now takes just two days with the help of the gantry.

“This project showcases John Holland’s ingenuity and innovation in bringing the team together and understanding the needs of the client and developing real solutions,” said Johnston.

John Holland’s gantry solution was recognised at the recent 2018 Comcare Safety Awards, where it won the ‘Prevention’ category. Project Manager Wes Johnston was also highly commended for his individual contribution to health and safety.

This technology can now be adopted on marine infrastructure projects worldwide.