When it comes to working at heights, simplicity equals safety. It’s easy to be seduced by high-tech harnesses but the acid test for your height safety equipment is whether it can be used by anybody. 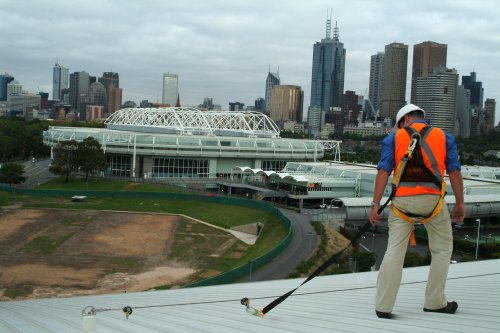 The law backs this up with the very prescriptive hierarchy of controls that applies to safe work at heights. Both WorkCover NSW’s Safe Working at Heights Guide 2004 and Victoria’s Code of Practice (No 28) - Prevention of Falls in General Construction detail a rigorous selection process for fall-prevention measures. The national code of practice under the model WHS Regulations entitled How to Prevent Falls at Workplaces, details a five-level hierarchy of controls to deal with height-safety hazards.

It is dangerous to ignore the first few levels of control but, unfortunately, many Australian rooftops are fitted with equipment that is level three or four when levels one and two could have been achieved or, in legal parlance, remain ‘reasonably practicable’.

Not surprisingly, the first step is to eliminate the hazard altogether so that the work is undertaken from ground level or on a solid construction. A solid construction is a fixed platform, which must comply with AS 1657 - 1992 Fixed Platforms, Walkways, Stairways and Ladders. It is categorised as a Level 1 control, since a stable platform is as good a protection as eliminating the hazard altogether.

Other controls listed in AS 1657 and in Level 2 of the hierarchy of controls include guard rails and walkways. Guard rails are considered a ‘passive fall prevention device’ because they do not need to be adjusted once installed. This makes guardrails the most viable permanent solution for safe maintenance access of all the Level 2 controls, which also encompass cherry pickers and scissor lifts. A guard rail is strong, durable and low maintenance, has a life span of perhaps 20 years, and is always in place when needed.

It is only if these ‘passive fall protection devices’ are not practicable that Level 3 category of safeguards, referred to as ‘work positioning systems’, can be used. These systems prevent workers falling over an unprotected edge and are harnesses attached by lanyards to roof anchors or static lines. If work positioning systems are not practicable, fall arrest systems that minimise the distance of the fall can also make use of static lines and anchors.

However, system misuse or the incorrect placement of static line and roof anchors can also mean that fall restraint systems, which are level 3 controls, effectively become level 4 fall arrest systems. As a result, the site’s safety standards are lowered, generally without the knowledge of the user or facility manager.

Because fall arrest systems only aim to minimise injury once a fall has occurred rather than avoiding it in the first place, they also carry the risk of the pendulum effect and suspension trauma. The pendulum effect occurs when a line is extended to reach a point a long way from the static line but close to the edge of the roof. If a person falls at this point, the line slides back towards the anchorage and, if that distance is greater than the drop to the ground, the person will hit the ground. Large fall distances or hitting something on the side of the building can also cause serious injuries.

There are two problems with level 3 or 4 controls that rely on workers wearing harnesses. First, even when systems are used properly, workers can still be injured and, second, it is very easy for even well-trained users to make potentially lethal mistakes.

High skill levels are demanded from users and both of these harness-based systems rely on equipment being suitable, compatible, carefully maintained and regularly tested. Users require ongoing training and administrative procedures need to be developed and constantly reviewed. Australian Standard AS/NZS 1891 provides information on the selection, use and maintenance of fall arrest system components.

Misuse of a static line system or roof anchor system can be catastrophic. The draft code doesn’t mince words when it comes to suspension trauma and toxic shock. It explains in detail the consequences of being suspended in a harness for a period of time and alerts the reader to the likelihood of death by suspension. Using a static line in total restraint requires a very high level of user skill, excellent communication and skilled supervision by the controller of the workplace. For this reason, fall restraint was very recently specifically removed from the scope of AS/NZS 1891.4. The standard dedicates two pages in Appendix F to explaining what total restraint is and what can go wrong if you don’t get it right. This is consistent with the treatment that the risks of using anchors and static lines receive under the model legislation.

The cost of maintaining static lines, roof anchors and the fall arrest or prevention systems to match means a guard rail quickly pays for itself (see Table 1). According to AS 1891, static line and anchorage systems must be labelled with their rating and commissioning date. They must be recertified and inspected six monthly in most states.

Aside from the cost and administration involved in maintaining the equipment, labour sourcing also becomes more complex with static lines and roof anchors. Using work positioning and fall arrest systems safely requires high skill levels and anyone accessing the roof, from plumbers to air-conditioning mechanics, needs to have completed specialised competency-based training. The legal responsibility for this ultimately lies with the controller of the workplace, whether the employer or the owner of the building. Since fall arrest systems at best leave a worker hanging in the event of an accident, they must also be watched over by a trained supervisor who has a rescue plan in place. 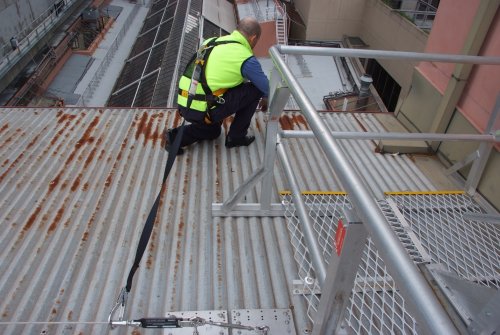 In contrast, guard rails do not need to be regularly inspected, saving facility managers considerable time, administration and money - not to mention avoiding any risk that the statutory inspections may have overlooked.

The case for static lines and roof anchors

Harness-based systems do have their place - as one of the last resorts for height safety when guard rails are not practicable. They are ideal, for example, when cleaning windows or painting a building facade where there are no other options available.

Aesthetics is the most common objection that Workplace Access & Safety’s auditors hear when recommending the installation of guard rails, once the total lifetime costs are understood. Solutions include powder coating the railings to match existing roof structures but, at the end of the day, aesthetic concerns mean little in the face of a prosecutor or, worse, the family of a worker.

The bottom line is that eliminating a hazard or putting Level 2 controls such as guard rails and walkways in place is less expensive and far safer than more intricate harness-based height safety systems.

Lower the risks when working at heights

Safe Work Australia has released resources about the risks of working at heights, including...

Two serious incidents since December 2019 have prompted SafeWork SA to issue a reminder about...