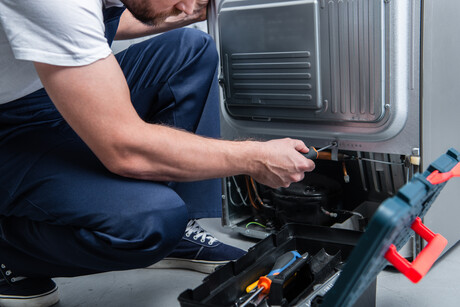 A refrigeration mechanic has been fined $33,000 for unsafe work practices at a food outlet shop that caused significant burns to himself and the shop owner. Angus Roberts pleaded guilty for failing to comply with his duty under section 32 of the Work Health and Safety Act 2012 (SA).

In September 2019, Roberts was repairing the condensing unit of a refrigeration cabinet for a food outlet shop within a shopping centre. To complete the work, Roberts was required to recharge the condensing unit with refrigerant gas. Roberts mistakenly used a flammable propane gas to charge the new condenser. On realising his mistake, attempts to remove the flammable gas caused it to ignite, creating an uncontrolled explosion and fire. The fire caused second-degree burns to Roberts and extensive burns to the shop owner, who was working nearby.

An investigation by SafeWork SA revealed that Roberts commonly decanted the hazardous chemicals required for his work into smaller, unmarked containers. The decanted chemicals were not properly labelled as required under WHS laws, which led to Roberts selecting the incorrect canister for the job. Roberts also failed to adequately identify the hazards and manage the risks associated with correcting his mistake. Roberts also failed to implement control measures when working with the hazardous chemicals, including having no exclusion zone in place which could have prevented the shop owner from being harmed.

The South Australian Employment Tribunal convicted Roberts and imposed a fine of $33,000 ($50,000 before a 40% discount was applied for an early guilty plea) for the offence and $2000 ($2000 before discount) for a regulation 342 offence plus legal costs and the Victim of Crime Levy. SafeWork SA Executive Director Martyn Campbell said this case demonstrates that a carefree attitude to dangerous chemicals can cause significant harm. Decanting any chemical or substance into another container and not marking it adequately presents serious risks to any task and makes it extremely risky when selecting the correct substance.

“Mr Roberts had 35 years’ experience as a refrigeration mechanic and electrician, yet he had a fundamental lack of understanding of what is required when handling dangerous substances and the damage that they can cause if they are not handled correctly,” Campbell said.

A safety alert has been issued after a worker was seriously injured after being exposed to a...