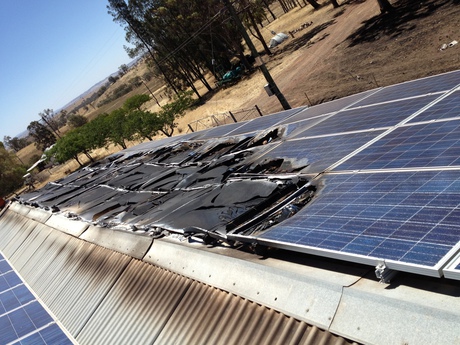 Solar panels cannot be turned off when exposed to light. In the event of a short circuit or an emergency such as a fire or flood, the solar panels continue to produce a potentially lethal amount of DC voltage. This creates an area known in professional terms as the ‘DC Danger Zone’, which until now has been a threat and a safety risk.

An Australian innovation called PVStop has now entered the market to provide a solution to this globally recognised problem. The technology is designed to safely deactivate photovoltaic panels in all weather conditions in seconds, mitigating the risk of DC electrocution to emergency services personnel, electrical contractors and all owners of solar panel systems.

Luke Williams is a CEC (Clean Energy Council) accredited renewable energy system designer at LJW Solar and also the inventor and patent holder of PVStop. He has worked in the solar industry since the early eighties, designing and installing solar photovoltaic and wind energy systems for a variety of domestic and commercial clients.

“Over the years, LJW Solar has become increasingly concerned about solar panel risks and associated solar PV hazards,” said Williams. “With over 1 billion solar panels installed globally and 1.5 million solar panel installations in Australia alone, the need for a solution to combat the risk of DC electrocution in the face of an emergency situation has become paramount; this is the driving reason behind why we developed PVStop.”

PVStop is a polymer film technology that literally acts as a ‘liquid blanket’, switching off the solar panels in seconds and reducing the risks faced by emergency services personnel, electrical contractors and all owners of solar panel systems. Once the threat has been eliminated, the film can be simply peeled off the solar panel within up to 12 months after application.

The non-flammable, fire-retardant polymer film technology is designed to protect people and the environment without damage to the solar panel system. Features include: shuts down PV panels in seconds; non-flammable and fire retardant; does not cause damage and simply peels off; and claimed to be safe, biodegradable and easy to dispose.

The NS series of safety switches from Pizzato provide PL3 and SIL3 safety levels and can be used...

The Monoxor XR is a portable exhaust gas analyser, designed to measure CO from combustion engines...