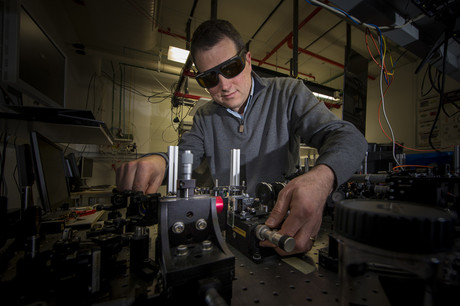 A research team involving The Australian National University (ANU) has invented a system that can detect chemicals in miniscule quantities and could be developed into a portable drug-testing kit.

ANU scientist Professor Dragomir Neshev, a co-author of the research published in Science, said the invention measured infrared signatures of organic molecules and translated them into barcodes, which could be used to identify specific drugs.

Infrared spectroscopy detects whether a given molecule is present in a sample by seeing if the sample absorbs light rays at the molecule’s signature frequencies.

“We think our invention could be developed into a commercial drug-testing prototype within just a few years,” said Professor Neshev, from the ANU Research School of Physics and Engineering.

“Our invention can detect and recognise drugs in extremely small quantities which are released when the body metabolises drugs, providing a new technology for police to mobile drug test motorists or suspected drug traffickers in a simple and non-invasive way.

“The device could replace bulky and expensive mid-infrared spectrometers, which cost more than $100,000 each. Our device would be portable and cost just a fraction of the price.”

Co-researcher Dr Mingkai Liu said such a device could also be used for medical diagnosis and to optimise the efficiency and benefits of prescribed medications for patients on expensive therapeutic treatments.

“Our invention consists of an engineered surface with hundreds of tiny pixels. Each pixel senses the molecular absorption at a specific frequency, generating a distinct barcode for every molecule that the surface touches,” said Dr Liu.

These barcodes can be analysed and classified using advanced pattern recognition and machine learning such as artificial neural networks.

This National Safe Work Month, the dangers of substance use and abuse in the workplace are being...