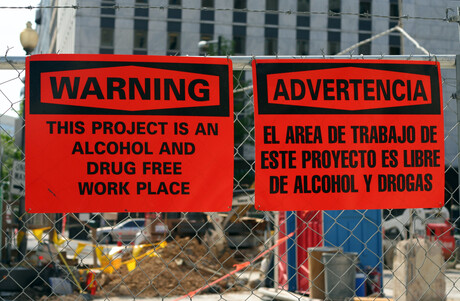 The statistics on drugs and alcohol use in Australian workplaces is alarming. Did you know:

D&A testing is becoming a common and an accepted part of work for many industries, particularly within the civil, construction and mining sectors. Employers want to protect their workers and their businesses from the dangers of drug and alcohol misuse at work. This is an important issue that needs to be managed carefully, not only for the immediate health and safety of employees, but also to protect employers from dangerous and costly workplace accidents, unfair dismissal claims and brand damage.

However, despite the best of intentions, the reality is many employers will be let down and not protected due to inadequate D&A management policies, poor execution of these, or even worse, employees not being aware of or educated on their policies.

So what are the most common pitfalls in D&A policies and procedures we see and how can you avoid them?

This is where a simple 1- to 2-paragraph policy exists, simply stating the attitude of the business towards the issue. Typically it states how the organisation ‘will not tolerate drugs or alcohol in the workplace’ or ‘has a zero tolerance approach to drugs and alcohol use’. This is definitely not enough.

The policy needs a detailed procedure to back it up by detailing the: who, what, where, when and how in relation to managing the risk of D&A in the workplace.

3. The ‘catch and sack’ approach

This is where procedures are considered harsh, unjust or unfair, such as immediate termination following one breach of the policy. When considering unfair dismissal claims the Fair Work Commission will look at the employer’s policy and procedures, whether it was followed and applied correctly, what process they went through to make their decision, and any training and support offered to the worker. They may also consider other factors, such as the employee’s work history and performance, age and personal circumstances when determining if the termination was harsh, unfair or unjust.

4. Inconsistency in the application of the procedure

Inconsistency in the application of the procedure and fairness are common problems. Employers often miss a step, intentionally or otherwise, or manipulate the procedure to get the desired outcome; for example, deliberately targeting a person in a random test… which of course, is not random! Other times they may terminate a worker without following the correct procedure. This will always put you in hot water.

This one is really simple, but so often not done well, or at all. Simply advising the policy exists will not suffice. Nor will training once and then never again. Employees should be made aware of the organisation’s policies and procedures at induction and ongoing during their employment — ideally a minimum of annually. Best practice is to also provide general education on the dangers of alcohol and drugs in the workplace, and include a competency test to show understanding.

Take the case of Cannon versus Poultry Harvesting. This case is a great example of how an employer lost an unfair dismissal claim, despite having a D&A policy in place and the worker being drunk on the job. Where did they go wrong? Let’s start by looking at a summary of the case:

Ms Cannon was employed by Poultry Harvesting and her work involved moving a large piece of machinery with an attached conveyor belt for the purpose of loading chickens onto trays. Once the chickens were loaded, they would be put into trucks for delivery. It was the night of Melbourne Cup, Ms Cannon was working night shift and having consumed “three or four glasses of wine” earlier in the day, fell asleep on the job. This led to approximately 60 chickens being killed. Ms Cannon was discovered passed out and smelling of alcohol. She was allowed to continue her shift and then terminated. She subsequently lodged an unfair dismissal claim. Her boss argued her conduct created a serious health and safety risk and that there was a well-known company policy, which had a ‘zero-tolerance’ approach to drugs and alcohol in the workplace. The worker was awarded 6 weeks’ wages (nearly $7000) in compensation and this did not include the employer’s costs and stress of running the case.

You may well be shaking your head and asking how can someone turn up to work drunk, cause chickens to be killed at significant cost to the business, and walk away with compensation? Well, the unfortunate reality is that in an unfair dismissal claim being ‘right’ does not necessarily protect you. This area of the law is complicated and does not always pass the ‘logic test’. Cases such as this one present a valuable lesson for employers. It is important to understand that it is often less about what the employee has done and more about what the employer did or did not do. This is where the employer’s policy and procedure, actions and decision-making will be heavily scrutinised.

Did you pick where they went wrong?

In this case the employer’s D&A policy didn’t measure up to standards and was not consistently applied. In summary, the judge found:

The employer’s policy documents were too general and unclear

Commissioner Wilson found no substantive evidence that workers were bound to a ‘zero tolerance’ policy and the employer’s documents contained ‘general knowledge’ about D&A restrictions but did not make it clear what was expected, and when.

Commissioner Wilson found the employer did not have sufficient knowledge about the worker’s condition to find she was intoxicated, and took no informed or objective assessment of her condition before sacking her. In addition, the worker had not been provided with an opportunity to respond to the allegations, or to have a support person present.

It was unclear whether the worker was aware of or given access to the policy and training on it.

The Commission found that the policy was aimed at correcting problematic behaviour through testing and counselling; however, this was not offered to the worker. Further, the employer contradicted its own decision by allowing Ms Cannon to continue to work her shift, despite finding her unfit for work.

Mr Nedelkovski was the driver of a heavy vehicle for Tasfreight. One day during his shift, his manager noticed that he was in the wrong location according to their GPS tracker. When he called Mr Nedelkovski to ask why this was, his response was “I don’t know how I got here. I must have zoned out.” This led his employer to request he undertake a D&A test, which he refused. Upon arrival at the clinic, Mr Nedelkovski said he was unable to urinate and couldn’t provide a sample. After nearly three hours had passed, he still maintained that he was unable to provide a urine sample. His manager then explained that if he didn’t provide a urine sample, his employment could be terminated. He explained to Mr Nedelkovski that under the company’s D&A policy, it clearly stated that failure to provide a sample would be treated as a ‘not negative’ result. Mr Nedelkovski still refused to provide a sample and was duly informed that his employment was terminated. He then filed an unfair dismissal claim. However, the dismissal was upheld — why?

The difference in this case is that the employer’s drug and alcohol policy and procedure, and their actions, clearly evidenced that:

So what are the key learnings for employers from these cases?

As they say… the devil is in the detail.

For the best protection of workers and the business a comprehensive D&A policy must be in place. It should be underpinned by a detailed procedure which clearly outlines what must happen and when, and the consequences for any breaches. It should state who is tested, what drugs are tested for, where, when and how testing is conducted, and by whom. It should also detail what support is available to workers and disciplinary procedures. Not only will having a clear, detailed, fair and enforceable procedure be more successful in eliminating D&A in the workplace, it will save your bottom line in the long run.

But remember, it is not enough to simply have a robust policy in place. Employers must also be diligent in their execution of the policy to ensure it is applied consistently and fairly and that workers are thoroughly and regularly educated on it — and make sure you can evidence their understanding! It is also wise to ensure your supervisors and managers are trained on the policy so they can take the right actions at the right time to ensure you stay protected. Ideally, they would have specific training on application of your D&A policy. Lastly, it is recommended you have a dedicated person who knows your procedure inside out who can provide procedural guidance when needed, or if you don’t have someone internally, make sure you have access to an expert when you need it.

So, now is the time to get out your policy, dust it off and review it to see if your business is at risk. Ask yourself if your D&A policy would stand up to such detailed scrutiny? Whether your procedure clearly outlines what to do in the above situations? And whether your employees really understand what is expected of them in relation to D&A at work?

Remember, it’s your responsibility and your neck on the line if not.