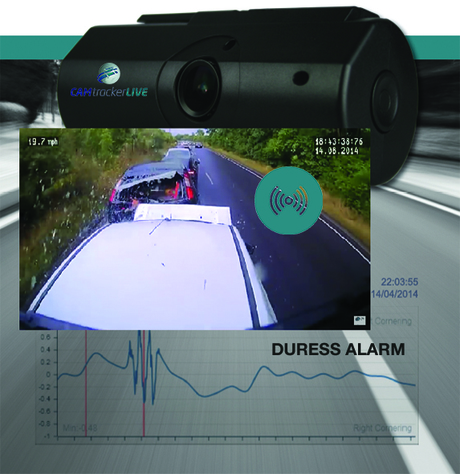 A major transport company recently approached FleetSeek to implement a monitoring solution that could improve safety for its drivers working alone at night, often in rural, distant locations.

FleetSeek worked closely with the company’s OHS and operational teams to gain an understanding of the business and its current systems and procedures. Based on this analysis, it then developed a solution specific to meet the needs of the company. The solution included CAMTracker LIVE with GPS tracking, geofencing and duress buttons.

CamtrackerLIVE is a real-time, in-cab driver safety camera that comes with built-in GPS tracking, geofencing and speed alerts. It also includes a G-Force sensor system that identifies erratic driver behaviour and sends a prompt alert to fleet operations, which then enables access to a video clip. The camera operates on the 3G/4G mobile network, which removes the potential of losing any data during an incident, unlike SD card-based cameras.

The duress button in conjunction with the driver safety camera can be used to promptly alert the transport company if an incident occurs. The video footage can then be used to determine what caused the driver to trigger the duress alarm.

Finally, multiple geofencing enables the fleet operator to set up perimeters/virtual fences around any area on a map. In turn, specific alerts can be set up and sent directly to fleet operations. For example, this feature could be used to identify situations where a vehicle has stayed longer in an area than required or if the vehicle enters/exits specific locations outside of working hours.

Choosing the 3G Driver Safety Cameras with integrated GPS tracking has allowed the transport company to monitor its fleet based on its actual business needs and to receive alerts customised specifically to manage the way their fleet operates. The camera’s G-force sensor has resulted in improved response times in the event of an incident.

The monitoring system has also resulted in the lowering of accident frequency throughout the fleet as a result of a changed driver behaviour culture within the company. And the company no longer needs to regularly call its drivers throughout the night for safety checks and location updates — this has freed up resources for the company.