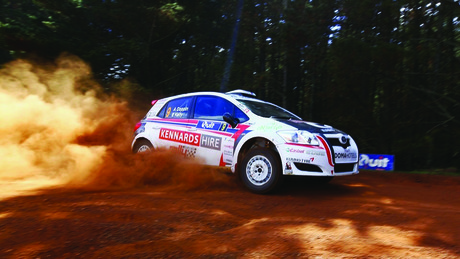 The FIA World Rally Championship is an international event that requires a large amount of work to ensure that it runs smoothly and safely.

Kennards Hire was engaged to provide and install the required equipment for the Coffs Harbour site of the event.

“The list of equipment is extensive, but it’s all to ensure the rally ran as smoothly and as safely as possible.”

The team began building the plan for the rally in March 2015. Meanwhile, bumping in all equipment began on 7 November 2016, allowing 10 days for the company to facilitate the completion of the hands-on part of the job.

As naming-rights sponsor, Kennards Hire contributed not only the plant hire equipment required for the rally, but also ran a marketing campaign to increase spectator engagement. They received positive feedback from businesses in Coffs Harbour, who enjoyed the attention that the rally brings to the community.

The company is also the major hire equipment partner for the Summer of Surf series and The Block television series.

Kennards Hire Rally Australia will return to the Coffs Coast in the closing round of a new-look FIA World Rally Championship on 16–19 November 2017.

Check out all the highlights from the Kennards Hire Coffs Harbour Rally here.