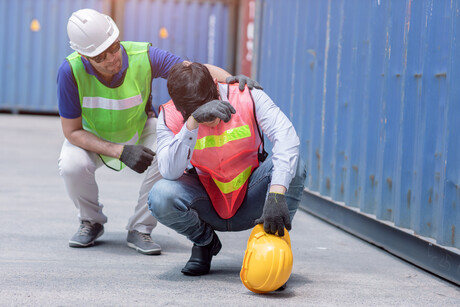 Approximately 200 construction and trade workers die by suicide in Australia every year, according to a report from Deakin University. Additionally, Beyond Blue states that on average, one in eight men will experience depression and one in five men will experience anxiety at some stage of their lives. While the construction sector isn’t the only industry with high suicide rates, it’s one that is often overlooked. Men’s mental and physical health is an area in need of serious discussion within businesses and was the inspiration behind the creation of the Check5 Program. Dean Noonan, former Newcastle Knights Wellbeing Manager, launched the program two years ago after he saw a gap in the market for quality wellbeing programs for businesses.

After undertaking extensive research to develop the program, Noonan took the sporting principles learned from his time assisting NRL teams and applied them to an ongoing process that consistently checks in with participants. Noonan believes the program is successful because it is consistently implemented and is a one-of-a-kind system.

“A lot of businesses will look at implementing a discussion around mental and physical health, but without the principle of process you’re not going to get anywhere with your staff. A one-off chat about health and wellbeing is going to be forgotten in a short amount of time. By having regular conversations and coaching, staff are reminded to look after themselves, and there’s someone on their team if they really need the help,” Noonan said.

Lake Macquarie company Air Extreme Air Conditioning introduced a focus on the health and wellbeing of staff during the COVID-19 pandemic. The majority of the company’s staff are males, working physically demanding jobs five days a week. The Co-Directors of Air Extreme, Mick and Justin Bull, knew there was a need to implement a program that addressed all areas of health for their team. Mick Bull said that mental health was a significant driving factor for reaching out to Check5 for support.

“We know that young tradesmen are three times more likely to commit suicide than the average male and that there’s a stigma in trade-based businesses for staff to look after their physical health and forget their mental wellbeing. We always strive to support our staff in all areas of their life to ensure they are able to do their job well and enjoy life outside of work, so accessing a program that addresses all areas of wellbeing was vital for us,” Bull said.

The Check5 Program focuses on five areas of wellbeing and performance: health, financial situation, work, relationships and leisure. When implementing the program, Noonan visited the Air Extreme office and trained key staff members to be coaches for the team. According to Bull, the company has since had ongoing contact with Noonan about the program and how it’s going. “Our staff have become real pioneers for the program and we’re seeing the results shine through at work, but also through their discussions around relationships,” Bull said.

As part of the program, staff are asked to complete a regular anonymous survey where they rate their wellbeing in the five areas on a scale from one to five. Anyone with a rating below a three is contacted by their coach to discuss how they’re feeling and provided with resources which can help them. Since implementing the program, Mick Bull and his fellow coaches have seen an improvement in the confidence of their team to speak about normally ‘taboo’ issues.

The program has brought about a positive change in the attitude and overall wellbeing of Air Extreme workers, both at work and outside. Mick Bull and his fellow coaches have also seen a huge improvement in the confidence of their team to speak about normally ‘taboo’ issues.

“We were drawn to the program because there really isn’t anything else like it. We want good players on and off the field so to speak, and if they’re struggling at home, they’re going to continue to struggle at work too. The program is working to change the wellbeing of our team and we highly encourage other businesses to invest in Check5. It really changes lives,” Mick Bull said.

Cited is an online platform developed by CV Check that allows for real-time compliance monitoring...

How sustainability initiatives can be strengthened by technology

One in five young Aussies in tech expecting redundancy

New Directors appointed to AUSVEG Board

Workforce in focus at MedInfo Sydney 2023

Study aims to save lives with new sepsis testing