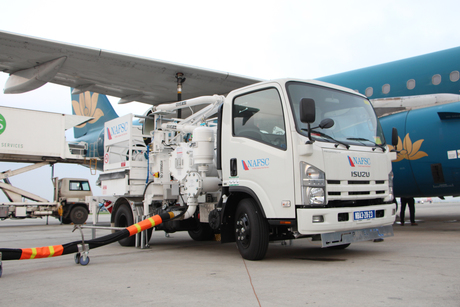 In a report released by the Air Transport Action Group (ATAG) last year, 37.4 million flights were scheduled in 2014 — translating to more than 100,000 flights per day. Add to that other passenger and cargo transport, including sea, rail and military applications, and the mind staggers to appreciate the amount of fuel required daily to power such activity globally.

A market leader in the refuelling equipment and service industry, Refuel International has over 40 years of experience playing a vital role in ensuring these industries are fuelled to function.

When in late 2014 it was tasked with manufacturing five hydrant dispensers for an international airport in Vietnam, Refuel International said electrical engineering specialist NHP was an obvious choice for handling the stringent safety and hazardous area requirements specified for the project, as well as other customised design elements.

“Having had experience with NHP in the past and being aware of what they can achieve through their Ex solution offering was a big plus as we deal with hazardous areas as a matter of course,” said Michael Wright, Refuel International’s engineering manager.

With over 1000 refuelling vehicles already in operation globally, Refuel International saw this project as an opportunity to introduce a new-to-market model. It soon became clear though that a better human interface solution was needed. After months of engineering and innovation the new ‘OCTO’ model was available, which placed a large focus on easy maintenance and simplified installation for equipment operators.

“One of the leading benefits of the new OCTO system is that it can help operators distinguish between user error and a genuine system fault, which reduces maintenance downtime and improves safety,” said Wright.

NHP is renowned in the electrical industry for its local manufacturing capability, reflecting the market’s increasing demand for ‘value-add’ products. However, understanding what value means to different customers isn’t as simple as it sounds. According to Justin Farrell, NHP’s specialist sales manager, this is where being local makes all the difference.

“No matter how good a product may be, it is nothing without the expert knowledge and understanding of the environment in which it will operate,” said Farrell.

“As a 100% Australian-owned company, our customers recognise that when we say we understand their needs, we really mean it. NHP’s philosophy of ‘people doing business with people’ has always rung true, and by having an extensive local presence we’re able to respond to our customers’ needs.”

“Combining our shared expertise, innovation and value of high-quality products, NHP helped us successfully develop a solution that not only satisfied this client, but formed a ‘blueprint’ for its manufacture moving forward,” added Wright.