Five lessons in leadership from the Thai cave rescue mission 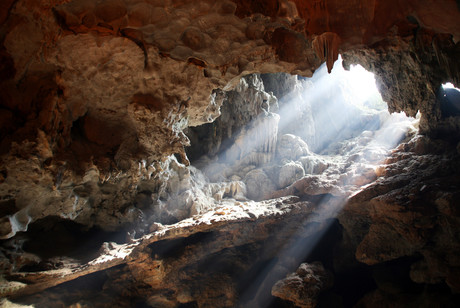 What does the successful Thai cave rescue mission teach us about leadership? Plenty. It’s a gripping story of how a desperate team pursued outcomes against a rapidly ticking clock and overcame insurmountable odds to achieve their goal.

The world held its collective breath during July. After being trapped underground for nine days, 12 young members of the Wild Boars soccer team and their coach were found kilometres into the flooded Tham Luang caves. Rising monsoon water levels, toxic gases, darkness and the complex cave system made this a high-risk rescue operation even for experienced cave rescue divers, let alone children with no dive experience.

Frantic Thai authorities showed us all the value of leadership by establishing clear, shared priorities, asking for help, engaging the right team needed for the job, and then planning and meticulously executing their strategy for success.

Lesson 1: Set clear priorities and make sure the whole team shares them.

In seeking to safely rescue the boys, the Thai authorities set clear and consistent priorities from the start. These were shared priorities, leading to a cohesive, well-bonded 1000-member strong rescue team.

Tragically, a former Navy Seal Diver, Saman Kunan, lost consciousness and died while delivering oxygen tanks. This underscored the danger of the mission. No matter the experience, leaders need to look out for everyone in the team — including each other.

Lesson 3: Ask for help to get the skills you need.

Early on, Thai authorities reached out internationally for experienced disaster experts and cave divers and were rewarded with the world’s best from 13 countries — including UK dive buddies Rick Stanton and John Volanthen, who discovered the boys and would lead the subsequent rescue operations.

Lesson 4: Assess your options, choose the best, but be ready to pivot if circumstances change.

The Thai authorities started with three options, including the drilling of a shaft through the mountain or waiting out monsoon season. Both were safer options. The final option, to swim the boys out, was the most risky of all. But after the oxygen in the cave system started to thin to dangerous levels, the most high-risk option was quickly identified as the only option left.

The actual rescue operation was carried out over three days, but only after the team had practised and refined their plan in a pool. Following the successful rescue of four boys on day one, the plan was reviewed and refined further to gain greater efficiencies. Subsequent successful rescue efforts became more streamlined and took less time to achieve.

The successful rescue of the Wild Boar soccer team will be remembered as an extraordinary achievement and it shows us how planning and prioritising, communication, and leading cohesive teams offers a pathway to successful outcomes, even against the odds.